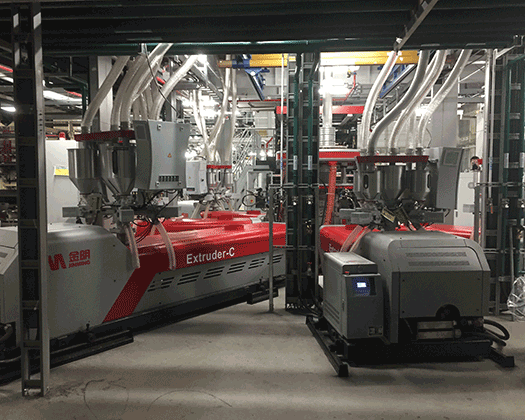 ExxonMobil and Jin Ming established a cooperative relationship as early as 2000. After years of in-depth cooperation in the fields of global technology, technology, market, training and personnel training, the two sides have established a high degree of mutual trust. The two parties further became a global strategic partnership in 2014.

POD is the English abbreviation of Five-layer PolyOlefin-Dedicated Blown Film, and it is also the abbreviation of the special extrusion technology for non-barrier five-layer co-extruded polyolefin recognized by the international industry. In film processing, POD process has more excellent mechanical properties of products, wider variation range of interlayer ratio, lower cost of comprehensive materials, greater selectivity of raw materials, more convenient process control, and safety of color printing, lamination and heat sealing of film products. Better performance and other advantages.
In order to meet the market demand for "high output and low consumption", we have developed a multi-stage two-way cooling air ring process on POD production equipment. The continuous improvement of the ring to the automatic air ring. The multi-vent high-efficiency two-way cooling air ring developed by Jinming is characterized by more than 3 air outlets, the air volume of each air outlet can be adjusted according to the size of the process, and the air ring can be vertically lifted along the axis of the die head, so that the strength of the film bubble can be improved. Significantly enhanced, the precision control of membrane products is more precise, and the output is greatly improved.